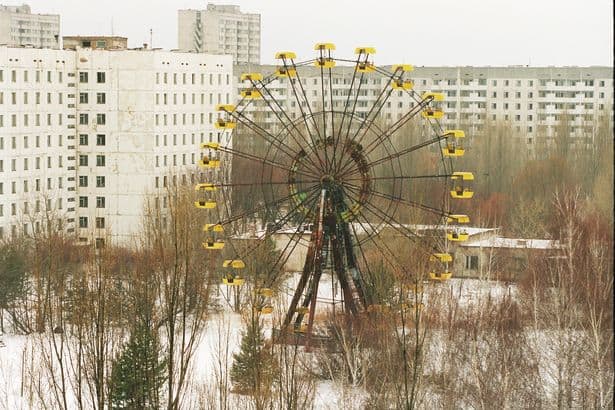 It’s hardly likely to be most people’s first choice when it comes to choosing a holiday destination once lockdown is lifted.

After all, the site of the world’s worst-ever nuclear disaster hardly springs to mind as a ‘relaxing getaway’ or a place in which to forget about life’s stresses and worries.

But that hasn’t stopped one travel agent organising a four-night city break to the largely abandoned city of Chernobyl in May next year.

Hays Travel in Cardiff is advertising flights from London Gatwick to Kiev, from which you can travel to witness the site of northern Ukraine’s catastrophic 1986 reactor meltdown, along with group and private trips to the Chernobyl Exclusion Zone itself.

Visits to that 19-mile cordon include a look around the now overgrown ghost town of Pripyat, which was originally founded to house the ill-fated power plant workers and their families.

One of the most haunting places on the planet – the story of which was recently documented in an acclaimed HBO/Sky drama of the same name – daring adventurers to Chernobyl will also be able to witness first hand the deserted schools, playgrounds and streets which, in the intervening decades, have been gradually reclaimed by nature.

They will be able to experience the eerie stillness which has since replaced the hustle and bustle of where some 50,000 people once went about their daily lives.

It’s a place where, in the weeks following the explosion and resulting fire, 134 servicemen were hospitalized with acute radiation syndrome (ARS).

Of those 134, 28 firefighters and employees died within months, with another 14 radiation-induced cancer deaths occurring over the next 10 years.

But while there is a rough agreement that around 50 people died from the blast or from ARS, there are estimates that up to as many as 500,000 altogether may have since passed away due to the disaster’s long-term impacts – the true extent of which remains unknown because of Russian state secrecy.

However, despite that chilling legacy, Chernobyl remains a popular place to visit for thrill-seekers and lovers of the macabre, with thousands of tourists attending each year.

Prices start from £495 per person and includes bed and breakfast, but places are limited.

The Cardiff-based football club Caerau Ely juniors has been crowned Wales’ Community Club Of The Year, after previously receiving the same title in the South Wales region earlier this year. The title was awarded by the Football Association of Wales (FAW) as part of a yearly competition that celebrates different aspects of grassroots football, in partnership with McDonald’s. While the award would usually be announced during a national match, this year the manager of the junior section of the club Gareth West had to accept it online due to pandemic restrictions. But this doesn’t take away from the pride that […]
The post Caerau Ely juniors crowned Community Club Of The Year for Wales appeared first on . Latest Cardiff News…

Work is complete on the second phase of affordable homes at the £100m Ely Mill development, including three zero carbon homes. Funded by Principality Commercial, the lending arm of Wales’ largest building society, and developed by Tirion Homes, the 78 properties have all been let by Cadwyn Housing Association. Within the portfolio of 78 homes are three carbon zero properties, which incorporate systems that can adapt heating and power supplies to the owner’s requirements, helping to save energy. The trial, coordinated by housing developer Sero, is part of the UK’s largest rollout of a demand-side approach to energy management at […]
The post Next phase of affordable homes complete at The Mill appeared first on . Latest Cardiff News…

Police and other emergency services are currently at the scene of a single vehicle collision which occurred on Coryton roundabout at approximately 4.40am today (Saturday, 28 November, 2020). Officers investigating the collision have had to put on road closures which are currently preventing access to the roundabout and also a section of the A470 at that location. The closures are likely to remain in place for several hours and motorists are urged to plan their journeys and use alternative routes – diversions are in place. The patience and cooperation of the public is appreciated at this time.
The post Diversions in place following early morning Cardiff accident appeared first on . Latest Cardiff News…

Shops in England will not re-open following the lockdown there until Wednesday, December 2 WalesOnline – Cardiff …