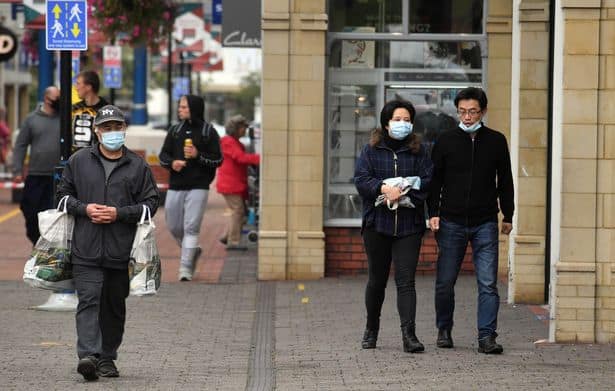 Following a surge of new coronavirus cases in Caerphilly, the area now has one of the worst infection rates in the whole of the UK.

The county has now become the first area in Wales to head back into a local lockdown.

Speaking at a Welsh Government coronavirus briefing on Tuesday, Health Minister Vaughan Gething said the incidence rate of coronavirus in Caerphilly has increased to 72.9 cases per 100,000 population.

The weekly total is watched closely by health bodies as a way of tracking the spread of the virus.

The Wales average now stands at 16.1, far below the rate seen in Caerphilly. Rhondda Cynon Taf has the second-highest figure, closely followed by Merthyr Tydfil.

Earlier on Tuesday, UK Government Health Secretary Matt Hancock told the House of Commons that Bolton has a rate of 120 cases per 100,000. It came as a number of lockdown measures were announced for the area, including banning outdoor meetings between households.

Statistics in the two countries are published differently, but a number of areas in England were placed into local lockdown with lower incidence rates than some places in Wales are currently recording.

This is how Caerphilly’s infection rate compares with the UK and the rest of Wales:

Cases per 100,000 population in the last seven days in each Welsh local authority:

Data in England is published differently so it is not always possible to make a direct comparisons between the two countries.

The latest comparable data was published by Public Health England on September 4.

The numbers reflect specimens taken between August 21 and August 27.

It found that Pendle in Lancashire was the local authority with the highest incidence per 100,000 with 71.1 cases.

All are areas where local lockdown rules have been enforced.

At Tuesday’s Welsh Government briefing, Mr Gething warned that the number of cases seen each day in Wales was likely to get worse before it gets better, saying it was likely to increase for the next two weeks.

Mr Gething said: “The cases we are seeing today will have been acquired over the last couple of weeks, which includes the summer bank holiday.

“We can therefore expect more cases to be confirmed over the next couple of weeks.”

He said that in Caerphilly there was now “community spread” and the seven day “incidence rate has increased to 72.9 cases per 100,000 population”.

“This is one of the highest rates in the UK,” he said.

The regulations will be enforced by police and the council. They apply to everyone living within the Caerphilly county borough area and Mr Gething said on Tuesday the lockdown would be in place until October “at the very least”.

Cardiff-based Matsudai Ramen is set to expand operations, rolling out national deliveries for its ‘assemble at home’ ramen kits from February 4th. Since starting with a ‘pop up’ model in late 2019 – which involved taking over local restaurants for short-term residencies – Matsudai’s “proper ramen” has attracted a cult following in South Wales – it is still the first and only standalone ramen ‘shop’ in the country. It has also made waves internationally, inspiring other pop-ups and shops to open in Bristol, the Philippines and beyond. Tough restrictions on the hospitality sector forced founder James Chant to adapt his original business […]
The post Cardiff pop-up Matsudai Ramen to trial national deliveries appeared first on . Latest Cardiff News…

While most people have been making sacrifices and sticking to the rules, a minority have carried on partying WalesOnline – Cardiff …

A Cardiff resident has been found guilty of speeding on the River Ely and ordered by magistrates to pay a £1,200 fine. Darren Ryan, from Leckwith, was filmed exceeding the legal maximum 5 knot speed limit, which also applies to boats using the River Taff and the Cardiff Bay inner harbour, on two separate occasions last June. Mr Ryan, who was in control of a boat named ‘Sea Leopard’ at the time of the offences, failed to attend court and was found guilty in his absence of breaching Cardiff Harbour Authority byelaws 5 and 14. Harbour Master, Andrew Vye-Parminter said: […]
The post Cardiff man fined for speeding on the River Ely appeared first on . Latest Cardiff News…

A unique body of work created by renowned artist Professor Sue Williams during lockdown has been purchased by the National Library of Wales. Cardiff-based Professor Williams, who is course manager in Fine Art: Studio Site & Context at the University of Wales Trinity Saint David’s (UWTSD) Swansea College of Art, spent the lockdown of 2020 at home alone and used the time to create artwork in three Chinese folding books which she had had specially made on a trip to China in 2017. Faced with the loneliness of the lockdown, she used books to record a unique diary of the mental […]
The post Professor’s artwork purchased by National Library of Wales appeared first on . Latest Cardiff News…