Cardiff residents are being asked for their views on plans for an exciting, new Canal Quarter in the city centre and on the Cardiff East Transport Scheme which will manage traffic options around parts of the city.

The scheme will also see the first phase of the re-opening of the dock feeder canal on Churchill Way and the creation of a new public square and event space – that will be built off Boulevard de Nantes and Kingsway.

In May last year the council started a public engagement process on significantly improving air quality in the city centre – as part of its Clean Air Project. Plans were drawn up to reduce traffic and Nitrogen Dioxide (N02) levels, specifically in Castle Street, while improving access to public transport and delivering dedicated routes for cyclists and pedestrians.

Cabinet Member for Strategic Planning and Transport, Cllr Caro Wild said: “Since the initial public engagement exercise took place in May last year, the council has taken on board all of the comments that we have received. We have been working hard to draw up the detailed design and we are now in a position to engage with the public on the final scheme. Following this public engagement, we hope to start on site in summer 2021.”

The scheme which will cost £13m to build, and includes £3m of City Deal funding, would see a new road layout along Boulevard de Nantes; onto Stuttgarter Strasse; Dumfries Place and Station Terrace. The scheme will also provide a permanent segregated cycleway; with new bus priority routes; and wider pavements to improve access and safety for pedestrians.

The first phase of the Canal Quarter: 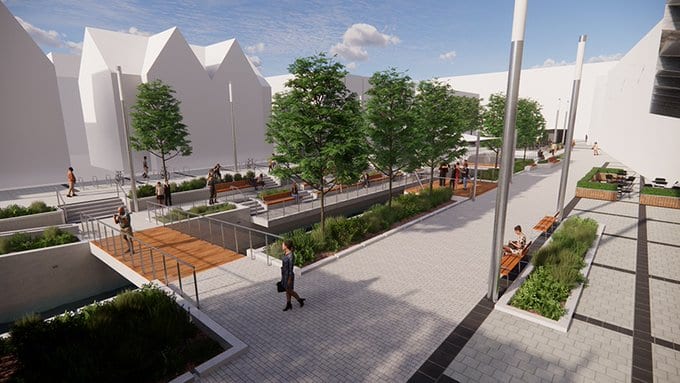 The dock-feeder canal on Churchill Way will be re-opened just before the junction with North Edward Street and running up to Queen St, to create a new city centredestination and a open,greenpublic space. The scheme will help revitalise this part of the city centre.

New amphitheatre-style seating, trees and green planting will be installed, with footbridges built across the canal so that people can get from one side of Churchill Way to the other. A new water feature is also being proposed for the site, as well as a pergola-covered alfresco dining area, and a stage for events and performances.

New drainage techniques (SuDS) will be used throughout the scheme which will significantly improve surface water drainage issues. New cycle parking will be installed at the southern end of Churchill Way. The taxi rank will be relocated further down Churchill Way, on the other side of the junction with North Edward Street. 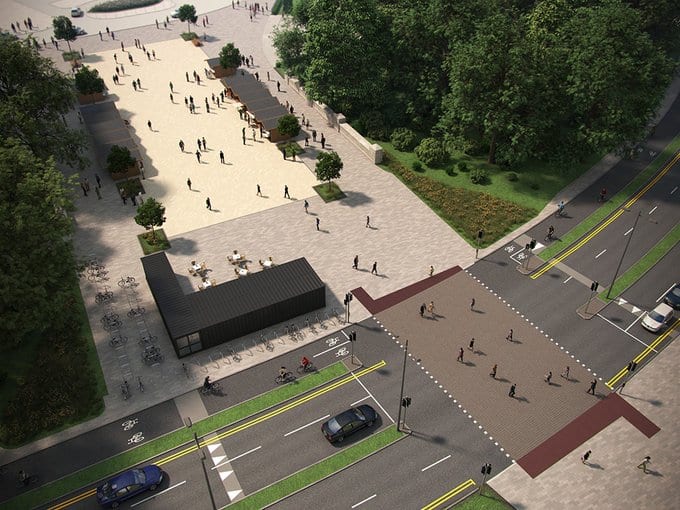 A new public open space will be developed off Boulevard de Nantes and Kingsway, which will significantly improve the area. The underpass to access City Hall and the Civic Centre will be filled in creating a new, large, pedestrian crossing at the same level to the public square to access Boulevard de Nantes, connecting the new public space with the civic centre using new paving throughout.

Vibrant all-year planting schemes will be installed to significantly green-up the area, alongside a new sustainable urban drainage system, which will use rain gardens (SuDs) similar to those used in the award-winning Greener Grangetown project.

A new coffee shop and outdoor dining area is also planned for the square. Extra seating will be put in around the public space which could also feature market stalls on events days. 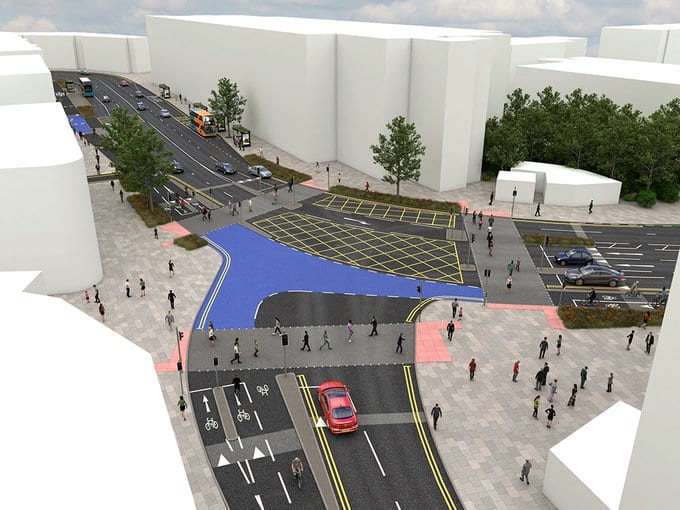 The re-modelling of Boulevard de Nantes, Stuttgarter Strasse, Dumfries Place and Station Terrace is being carried out by relocating traffic lanes and installing a two-lane segregated cycleway throughthe scheme. This cycleway will then connect to the current pop-up cycleway which is being built on Newport Road, up to the junction with Broadway.

Bio-diverse bus stops, otherwise known as ‘Bee Bus Stops’ will be installed with wild flowers planted on the top of the bus stops to attract bees and other insects. Safer and larger pedestrian crossing facilities will be put in place throughout the redevelopment of this stretch of carriageway and junction improvements will be made on all adjoining roads.

Due to the improvements that are being made to the road network, changes will be made on how people access the area by private car. All access to Churchill Way will be from the south via Adam Street and Bute Terrace.

All car parks on Station Terrace – including the residents block and the Masonic Hall – will be accessible from the north via Newport Road and Dumfries Place and a ‘’bus gate’ will limit access after the turning to the Masonic Hall car park.

Access to the Queen Street pedestrianised area will also change as part of the scheme, as the main access point will move from its current location, on the Dumfries Place junction, to Windsor Place. The timings for deliveries will remain the same, between midnight and 10am and when vehicles exit from the area, they will have to leave through the exit on the west end of Queen Street.