Following updated public health advice received from the office of Wales’ Chief Medical Officer over the weekend, the ice walk attraction at Cardiff Castle and a similar event planned at Swansea’s alpine village has been cancelled.

In a statement released by Cardiff Castle, the venue said:

“It has been decided that the ice walk attractions, which were due to open in both Cardiff and Swansea city centres will remain closed to the public.”

Work only recently started to create a “Christmas at the Castle” event at the heart of the city in lieu of this year’s Winder Wonderland which usually resides in front of City Hall.

Sayers Events, the operator of the famous Cardiff’s Winter Wonderland, are involved in a variety of outdoor festive features in and around Cardiff Castle designed to enhance the Castle’s planned activities such as the Victorian Santa Tours, the Keep Dining Experience and the Lone Stag Bar. They had aimed to give the people of Cardiff something to really look forward to in these challenging times.

The main attraction this year was the open-air Ice Walk, along the lines of the one introduced at Winter Wonderland last year, but with a wider pathway, to allow greater social distancing and with limited capacity, giving all ages the chance to get their skates on. All sessions had to be pre-booked, but customers have now been told to expect an automatic refund following the cancellation of this year’s event.

Swansea also had a similar event planned for the festive period at their alpine village, but this has also been cancelled due to coronavirus. 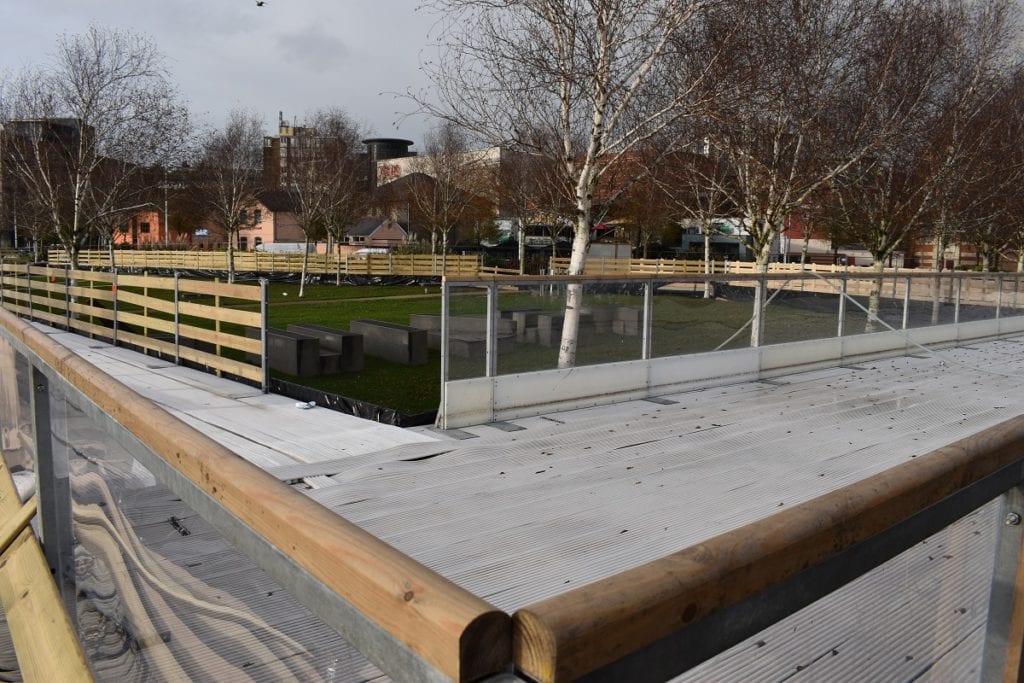 A joint statement by Cardiff Council and Swansea Council said:

“Following updated public health advice received from the office of Wales’ Chief Medical Officer over the weekend, it has been decided that the ice walk attractions, which were due to open in both Cardiff and Swansea city centres will remain closed to the public.

“Both local authorities appreciate the disappointment this will create for residents and would like to apologise for any inconvenience this will cause. However, the safety of everyone during the pandemic remains our main concern and it’s important we follow the latest scientific evidence. Anyone who has booked and paid for a slot on an ice walk will receive a full refund from the organisers. Customers do not need to do anything to activate the refund, it will be applied automatically. Please be aware that it could take up to 5 days to show in your account.

“The food and drink elements are already open. It is anticipated that other aspects of the Christmas attractions will open in both cities over the next few days.”

A Cardiff woman is taking on a 24-hour walking challenge to help raise funds for her friend’s seven-year-old son. Nia Thomson, 38, a production manager with the National Theatre Wales met Kasia Thompson, 38, at Freshers Week at the University of Aberystwyth in 2001 when they both joined the karate club. Kasia’s son Leon, 7, from Codsall, West Midlands, lives with cerebral palsy, global development delay and sensory processing issues as well as being non-verbal. Over the last few years the Thompson family and their supporters have raised over £80,000 for a selective dorsal rhizotomy operation carried out at Alder […]
The post Cardiff woman plans to walk for 24 hours for charity appeared first on . Latest Cardiff News…

The leaders of three major Welsh councils are calling for a comprehensive and significant support package to help cities through the pandemic. Those who head Cardiff Council, Newport City Council and Swansea Council say that, although direct action continues to be taken by local authorities and major investment made, cities are being particularly badly impacted by the crisis. The challenge has been brought into sharp focus this week by the troubles of high street retail giants Arcadia and Debenhams. Cardiff, Newport and Swansea together employ tens of thousands of people in retail and hospitality. In a joint statement, Councillors Huw […]
The post Council leaders call for city support package appeared first on . Latest Cardiff News…

Former Cardiff University chaplain Paul Overend is on trial at Newport Crown Court. The 53-year-old, who is now based at Lincoln Cathedral, denies the accusation WalesOnline – Cardiff …