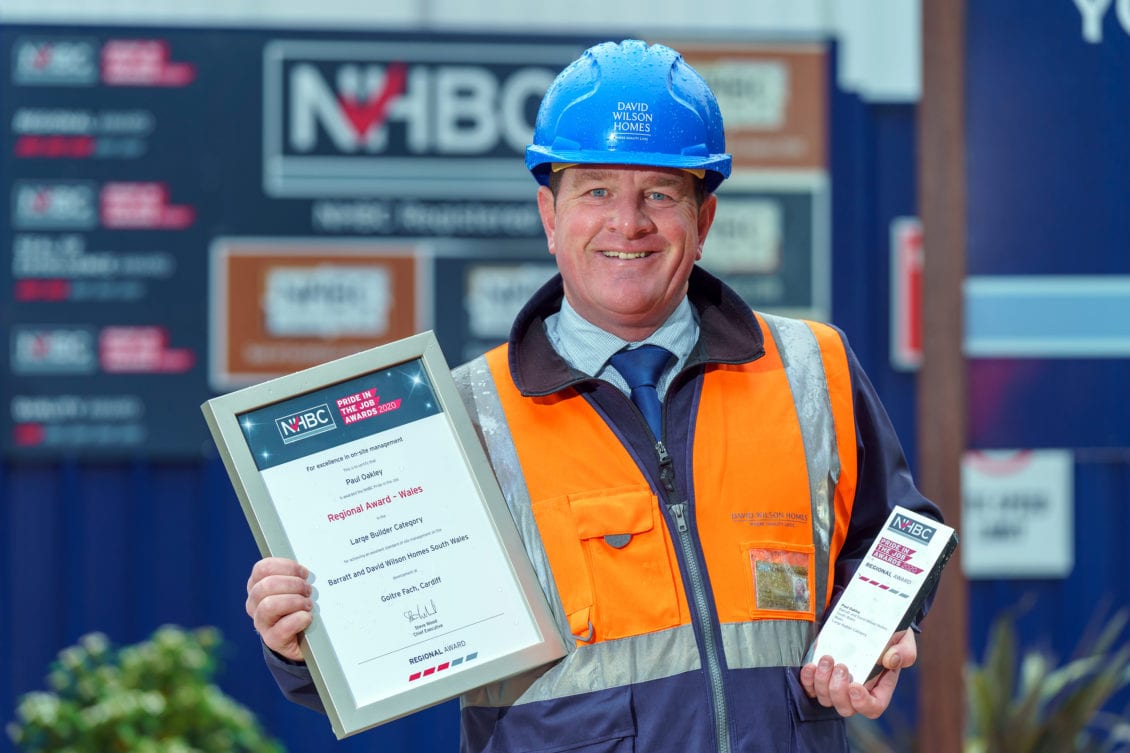 A Cardiff-based site manager from David Wilson Homes South Wales has been recognised for exceptional on-site management at the National House-Building Council’s (NHBC) Welsh regional Pride in the JobAwards.

Paul Oakley, Senior Site Manager at Goitre Fach in St Fagans, was presented with three illustrious awards, a Quality Award, Seal of Excellence and a Wales Regional Award — a feat which will see him represent Wales at the NHBC UK national awards in January 2021.

With more than 450 site managers shortlisted, the NHBC judging panel opted to award Paul as an outstanding example of dedication, passion and leadership in Welsh construction.

Celebrating its fortieth year in 2020, the NHBC’s Pride in the Job Awards scheme has played a key role in promoting the high quality of new homes in Wales and the wider UK by showcasing and rewarding best practice among site managers in the industry.

The thorough awards process involves a series of spot checks on site, covering everything from technical skills and quality workmanship to customer service and site safety — all merits which Paul has excelled in this year.

This is the ninth Pride in the Job award Paul has received in his four years as Senior Site Manager. However it’s the first time he has won the Wales Regional Award — the title which has earned him a place at the NHBC UK national awards next year.

On achieving this milestone, Paul said: “I have won many Pride in the Job awards since joining the company in 2016, including four Quality Awards and four Seals of Excellence, but the Regional Award is the one all site managers work hard to achieve.

“Customer satisfaction is at the heart of everything we do, so to be recognised by the NHBC for the quality homes we produce for our customers fills me with great pride — especially when competing against thousands of other talented site managers within the industry.

“I’ve managed Goitre Fach for two years now, and overseeing its development through to completion has been extremely rewarding. House building is without doubt a team effort, and I would like to thank the Directors, Line Managers, Assistant Managers, my team and sub-contractors for their hard work and encouragement.

“My family have always been so supportive, too, so this accomplishment is a reward for them just as much as it is for me. I’m now looking forward to the national Pride in the Job Awards, taking place early next year.”

Now in his third year as Site Manager at Maes Y Deri, Kurt was proud to receive his very first NHBC Seal of Excellence, as well as the Quality Award, commenting: “My journey with Barratt Homes began just four years ago, and the support and wealth of experience I’ve received from senior management and other departments in this time is second to none.

“They always strive to achieve the highest of standards — an attitude that, in turn, filters through to the wider team and helps us deliver the best possible homes for our customers.”

A charity in Cardiff has been crowned as the winner of Virgin Media’s ‘Local Legends’ competition by a prestigious judging panel for their selfless efforts during the Covid-19 pandemic. Rumney Forum, which is a community-led charity and FareShare partner, was nominated for Virgin Media’s Local Legends competition which recognises those who have made a significant […]
The post Cardiff charity crowned ‘Local Legends’ for Covid-19 response appeared first on . Latest Cardiff News…

New online marketplace Boxini is making it easier than ever to shop local, from the comfort of your own home. Launched last year, Boxini gives you access to delicious, fresh, and top-quality groceries from independent local businesses in South Wales. It has never been easier to support local in one convenient doorstep delivery. Dominic and […]
The post Cardiff brothers launch online marketplace Boxini appeared first on . Latest Cardiff News…

Cardiff’s latest and most luxurious destination, The Parkgate Hotel, will launch in style with amazing opportunities to stay close to the action when the might of the southern hemisphere visit Wales for this year’s Autumn Nations Series. Operated on behalf of the Welsh Rugby Union, The Parkgate is located just a drop kick from Principality […]
The post First images of Cardiff’s new luxury hotel appeared first on . Latest Cardiff News…

Another letting has been concluded at Cardiff’s tallest office building, with social justice law firm Thompsons Solicitors signing a lease at the 25-storey multi-let Capital Tower. New arrival Thompsons specialises in personal injury and medical negligence support to people across Wales and the UK.  It has taken a 10 year lease on a 2,299 sq […]
The post Thompsons signs lease at Cardiff’s tallest office building appeared first on . Latest Cardiff News…