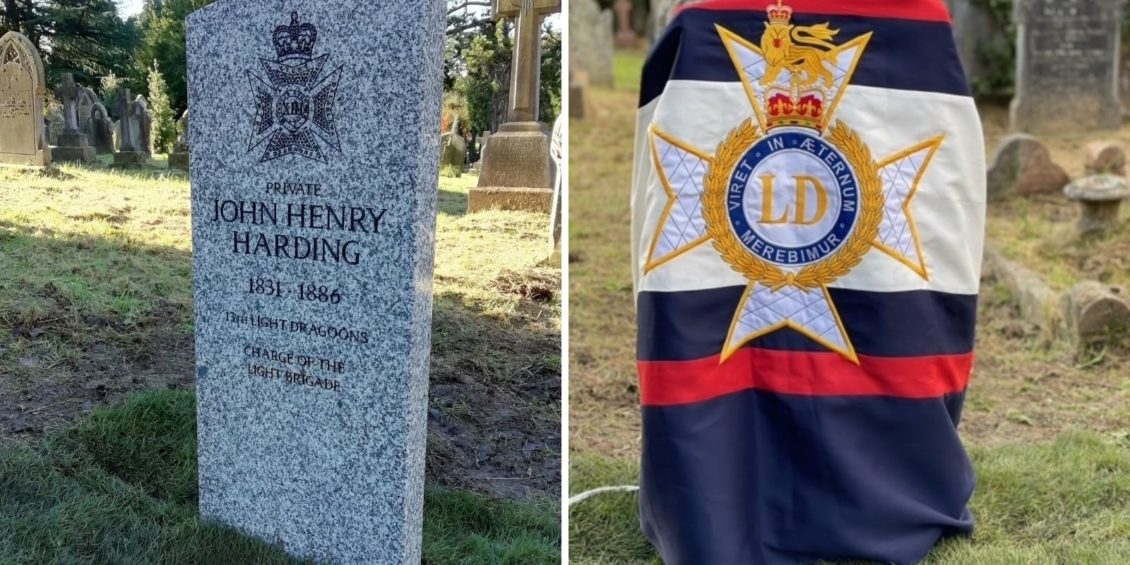 A special memorial has been unveiled today at Cathays Cemetery to honour John Henry Harding of the 13thLight Dragoons who took part in, and survived, the Charge of the Light Brigade.

The existence of the grave has been known for some time but was marked only by a small wooden cross that had deteriorated over time.

The Friends of Cathays Cemetery were approached by Martin Berkeley, a retired officer of The Light Dragoons, to see if it would be possible to provide a more fitting memorial.

Harding, a native of Glastonbury, enlisted at Bath in 1850 aged 19 and served in in the army for more than 12 years taking part in all of the four main battles in the Crimean Campaign.

In 1870 he settled in Cardiff, becoming licensee of the Gardeners Arms on City Road, which he renamed the Military Canteen, and later taking on a similar establishment in Wyverne Road, Cathays. He died in poverty in 1886 but was given an impressive funeralwith the cortège headed by about 70 soldiers from the Welch Regiment.

Councillor Michael Michael, Cabinet Member for Clean Streets, Recycling and Environment said:”November is a month when we are reminded to reflect on the sacrifices made by the many men and women in conflict.

“It is fitting tribute toJohn Henry Harding to mark his important service during one of the most well-known military events in history, during this month of remembrance.”

John Harding’s great-great grandson, and one of many descendants, Tim Hill said “My mother always told me about a family link to the Charge of the Light Brigade, but I did not know what that link was. It was only when I started researching the family history that I found out that he was my great-great grandfather and where he was buried.

“The family are delighted that he is now being honoured with a headstone.”

“This memorial to John Henry Harding will not only preserve his story and his memory which were at risk of being lost, but also links Cardiff to one of the most well-known military engagements of the 19thcentury – The Charge of the Light Brigade.”

The memorial to John Henry Harding was unveiled at Cathays Cemetery on Tuesday, November 23 attended by the Rt. Hon. The Lord Mayor of Cardiff, Councillor Rod McKerlich;Lord Lt Morfudd Meredith,Tim Hill, great-great grandson and other descendants of John Henry Harding;Martin Berkeley, a retired officer of The Light Dragoons andTreasurer, John Farnhill, and representatives from Friends of Cathays Cemetery.

The event was organised by John Farnhill along with Martin Berkeley and descendants of John Harding, with the full support of Cardiff Bereavement Services and Mossfords Monumental Masons.

Cardiff man fined for speeding on the River Ely

A special memorial has been unveiled today at Cathays Cemetery to honour John Henry Harding of the 13thLight Dragoons who took part in, and survived, the Charge of the Light Brigade. The existence of the grave has been known for some time but was marked only by a small wooden cross that had deteriorated over […]
The post Cathays Cemetery unveils memorial to Cardiff survivor of ‘Charge of the Light Brigade’ appeared first on . Latest Cardiff News…

One of Wales’ leading mass participation race organisers, Front Runner Events are delighted to announce that they will take over the Cardiff 10k and 2K fun run that will take place on September 4, 2022. The event which was founded in 1985 by Kidney Wales remains to be Wales’ largest 10k road race. It is […]
The post Running of Cardiff 10K taken over by new race organiser appeared first on . Latest Cardiff News…

Heron Foods, the discount retail chain, has today announced that they’ll be opening a brand-new store on Countisbury Ave in Llanrumney at 9 am on Thursday, 25th November 2021. The new store has taken on all of the staff from the previous store, who are all long-standing and well-known in the community. On opening day, […]
The post New Heron Foods Store Coming to Llanrumney appeared first on . Latest Cardiff News…

A syndicate of 24 business angels has completed a £500,000 investment in Concentric Health, a Cardiff-based health technology start-up transforming how decisions are made about our health with a new market-leading digital consent to treatment application. Led by lead technology investor Ed Parkinson, the syndicate has invested £345,000, along with £72,500 match-funding from the Development […]
The post Business angels unite to back Concentric Health appeared first on . Latest Cardiff News…