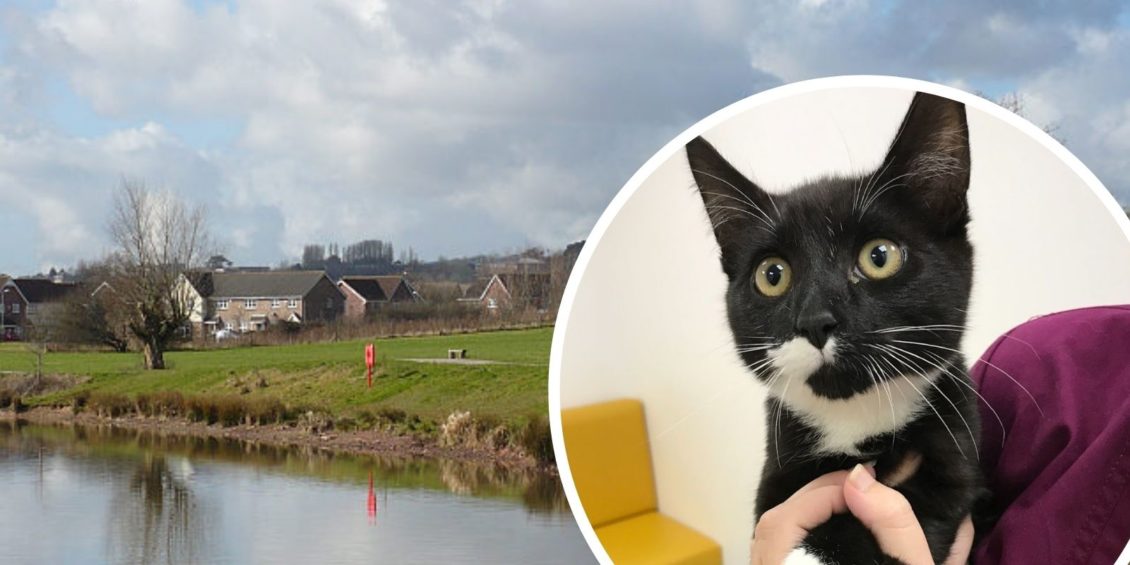 A kitten is recovering from a terrifying ordeal after a member of the public said she saw three boys threatening to ‘burn’ him at Hendre Lake in St Mellons.

The woman was walking her dog around the lake – a popular site for birdwatching and fishing – when she said she heard a loud meowing noise coming from behind some bushes.

When she went to investigate she found three boys, thought to be aged around 12 or 13, holding a black bin liner and discussing “burning the cat” they had trapped inside. The woman quickly intervened and threatened to call the police and the boys ran off.

Inside the tied up bag, she found a distressed black and white kitten – thought to be aged around seven to eight-months-old – huddled up inside.

The woman was able to take the kitten home temporarily, before he was collected by RSPCA inspector Simon Evans and taken to be checked over. Thankfully uninjured, the kitten is now being boarded by the RSPCA at a private establishment.

Sadly he was not microchipped, and the charity will look to rehome him at one of their centres if an owner does not come forward.

RSPCA Cymru is appealing for information about the incident, which happened between 4 and 5pm on Thursday 14 October.

Inspector Evans said: “This sort of incident beggars belief, and we are extremely grateful that this kind-hearted member of the public intervened when she did. Although understandably nervous at first after his ordeal, the kitten is now doing well. He’s had a thorough check over, including some flea and worm treatment, and is now safe and enjoying lots of TLC.

“As well as appealing for information about this appalling incident, someone could be missing their cat as the lake is very close to residential areas. If this is you, please get in touch with the RSPCA.”

Anyone with information about the incident should contact the RSPCA’s inspectorate appeal line on 0300 123 8018.

Wales to get its first Taco Bell Drive Thru

A special memorial has been unveiled today at Cathays Cemetery to honour John Henry Harding of the 13thLight Dragoons who took part in, and survived, the Charge of the Light Brigade. The existence of the grave has been known for some time but was marked only by a small wooden cross that had deteriorated over […]
The post Cathays Cemetery unveils memorial to Cardiff survivor of ‘Charge of the Light Brigade’ appeared first on . Latest Cardiff News…

One of Wales’ leading mass participation race organisers, Front Runner Events are delighted to announce that they will take over the Cardiff 10k and 2K fun run that will take place on September 4, 2022. The event which was founded in 1985 by Kidney Wales remains to be Wales’ largest 10k road race. It is […]
The post Running of Cardiff 10K taken over by new race organiser appeared first on . Latest Cardiff News…

Heron Foods, the discount retail chain, has today announced that they’ll be opening a brand-new store on Countisbury Ave in Llanrumney at 9 am on Thursday, 25th November 2021. The new store has taken on all of the staff from the previous store, who are all long-standing and well-known in the community. On opening day, […]
The post New Heron Foods Store Coming to Llanrumney appeared first on . Latest Cardiff News…

A syndicate of 24 business angels has completed a £500,000 investment in Concentric Health, a Cardiff-based health technology start-up transforming how decisions are made about our health with a new market-leading digital consent to treatment application. Led by lead technology investor Ed Parkinson, the syndicate has invested £345,000, along with £72,500 match-funding from the Development […]
The post Business angels unite to back Concentric Health appeared first on . Latest Cardiff News…