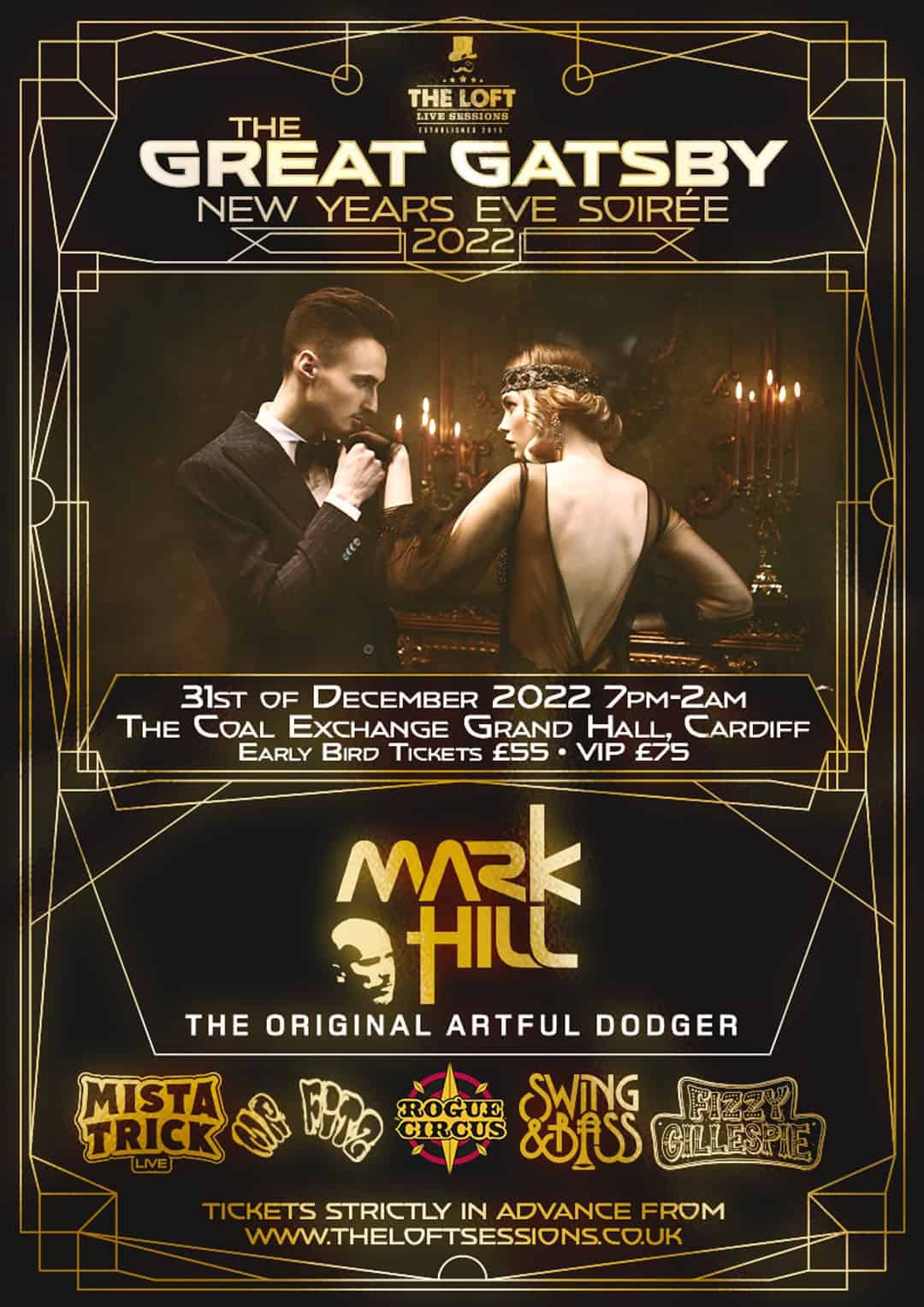 Ladies and Gentlemen, this new years eve, we are going all out to bring you a party like no other, held in what has to be the most stunning venue we have ever seen!

The Great Gatsby Soiree is a modern-day take on the famous Great Gatsby parties.  Don’t expect cheesy cover bands,  this one is a full-blown cheese-free party featuring some of the very best swing and bass DJs, a seven piece big band and a DJ set the original Artful Dodger!

With Four Ivor Novello awards, a MOBO award, a number one album, two number one singles, and over 20 million records sales worldwide, not to mention untold streams; it’s hard to believe that it’s been over 2 decades since Mark Hill rose to fame as one half of the Artful Dodger and co-writer/producer of Craig David’s multi-platinum album, Born To Do It.
The first Artful Dodger release “Rewind” – originally a white label considered by many to signify the cross over of Garage from the underground to the mainstream is still being played across TV, Radio and in clubs worldwide to this day.

Artful Dodger then went from strength to strength after the success of Rewind, with Movin’ Too Fast,
Woman Trouble (featuring Craig David and Robbie Craig), followed by the now classic album, It’s All About The Stragglers. Over the last 20 years, Mark has run several record labels, a publishing company and has worked with the likes of Corinne Bailey Rae, Becky Hill, MNEK, Ed Sheeran, and countless others. As Artful Dodger he got a cheeky mention on “Closer To My Dreams” by Drake on one of his mix tapes and has recently been sampled by Justin Bieber who then posted on TikTok singing along to Fill Me In.

Some of the recent Mark Hill remixes include Sam Smith, Mark Ronson, The 1975 and
Jack Garratt.

You’ll be greeted by our gorgeous showgirls, VIP tickets are available and this guarantees your table for the night. Grab yourselves a cocktail, enjoy the fire performers outside in the courtyard area, and await the incredible Mista Trick Live!

The band that has taken this year’s Glastonbury, Boomtown, Shambala, Swingamajig and Beautiful Days festival by storm! Everyone is talking about Mista Trick Live and it’s easy to see why! Expect live swing from a seven-piece band mixed with some absolutely filthy bass!

Add a sprinkle of stunning burlesque, some captivating close-up magic and outstanding circus performances from The Rogue Circus, and you’ve got yourself a party Gatsby himself would be proud of! Golly gosh it’s going to be absolutely bloody spiffing!