Cardiff residents are complaining of a build up of recycling bags on city streets as rubbish fails to be collected since Christmas.

Every year there is inevitably an increase in recycling bags following the Christmas and New Year period as people unwrap gifts. However, this year in particular, there is an estimated 400 tonnes of additional recycling waste that has to be collected by refuse collectors. The additional waste is being blamed on more people shopping online. Earlier in December, the council said that gift wrapping would need to be bagged separately in black bags and not recycled due to the pressure that the pandemic has put on teams and usual processes.

To make matters worse, the on-going pandemic has meant that Cardiff Council teams are currently short-staffed and are down 17% on their usual numbers.

If the council were to collect all of this rubbish in one day, they would require an extra 50 waste vehicles and 150 extra staff. To put this all into perceptive, the council would on average collect 50 tonnes of rubbish per day, as opposed to the 400 tonnes built up over Christmas this year.

Although the council has said residents can expect rubbish to be collected in the days after a missed collection, it may be added on to the following week’s collection. 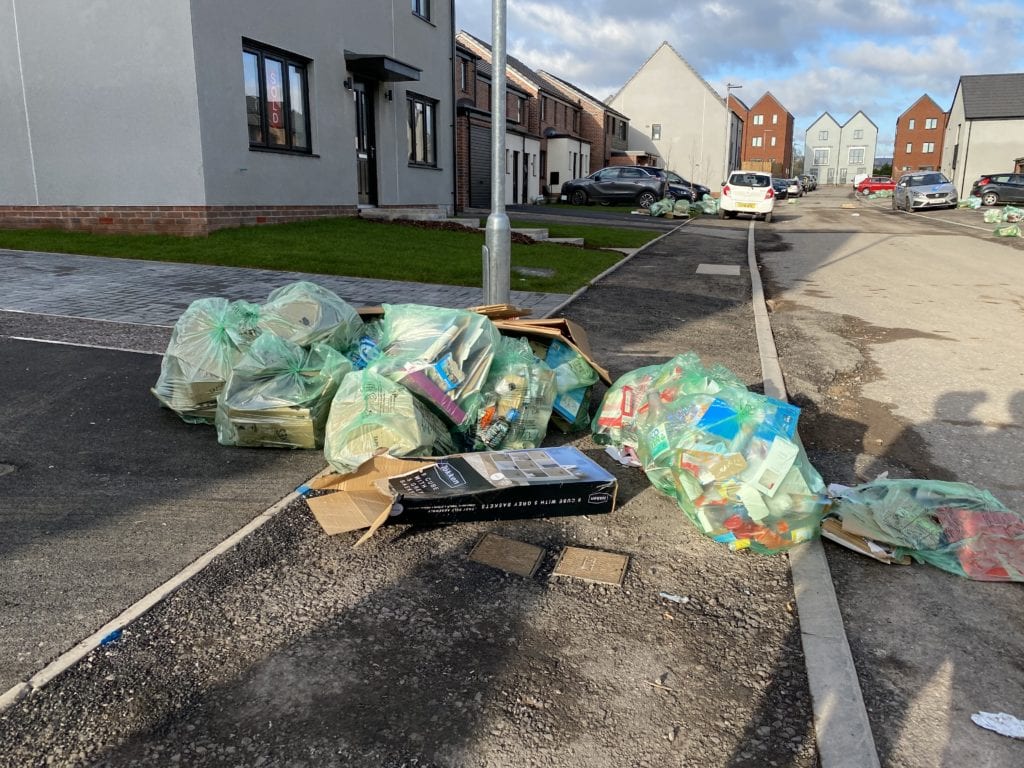 In St Edeyrns Village on the outskirts of Cardiff, residents of the Persimmon Homes housing development have found recycling bags collected for half of the area, while the other half remain on streets for another week. Although the council has said to leave rubbish bags out just in case, the weather often sends bags flying around and across roads.

Cardiff Council’s statement in full below:

The council is currently working hard to remove the huge amount of extra recyclable waste which has been created over the Christmas period and we want to apologise to residents for any inconvenience.

We understand residents will be concerned if they have had a missed recycling collection, but we want you to know that we are doing everything we can to remove the remaining green bags from the city’s streets as soon as we can.

The amount of waste presented for collection over the Christmas period has increased substantially. We believe the early lockdown and a big shift towards online shopping has contributed to the large amounts of recycling and packaging we are seeing.

We want you to know that the situation isn’t unique to Cardiff. We have been informed by the Welsh Local Government Association that this trend has been seen across many local authority areas.

Right now we estimate there is an extra 400 tonnes of green bags (recycling) on the streets compared with the same time last year. To collect all of this in one day would require an extra 50 waste vehicles and an extra 150 staff. On a normal day we would collect 50 tonnes.

Unfortunately, alongside this extra waste, the council has also experienced a 17% reduction in staff in the department due to workers either testing positive for COVID or having to shield, or self-isolate.

The council has re-deployed suitable staff from other parts of the council to help, but street collections involve operating heavy machinery and working around moving vehicles. We have to be sure that any staff drafted in are able to carry out this work safely.

Facing the double problem of reduced staff numbers due to COVID and the increase in the amount of recycling, we took the decision to prioritise collecting general waste and food waste in the first instance, which is why some recycling has yet to be collected.

The pictures showing how Cardiff has changed in the last decade

Cardiff Council in partnership with Cardiff University, is providing children and young people with a unique and innovative opportunity to help shape the future of Cardiff by using a virtual game platform. ‘Craft Your City’ is a Child Friendly Cardiff initiative which aims to engage young people in a range of strategic developments by using Minecraft Education. Developed by Cardiff’s Education Service and Cardiff University School of Computer Science and Informatics, the digital approach sets a series of real-world challenges and provides a way for young people to share their ideas of how they would like Cardiff to look in […]
The post Youngsters asked to help shape Cardiff using Minecraft appeared first on . Latest Cardiff News…