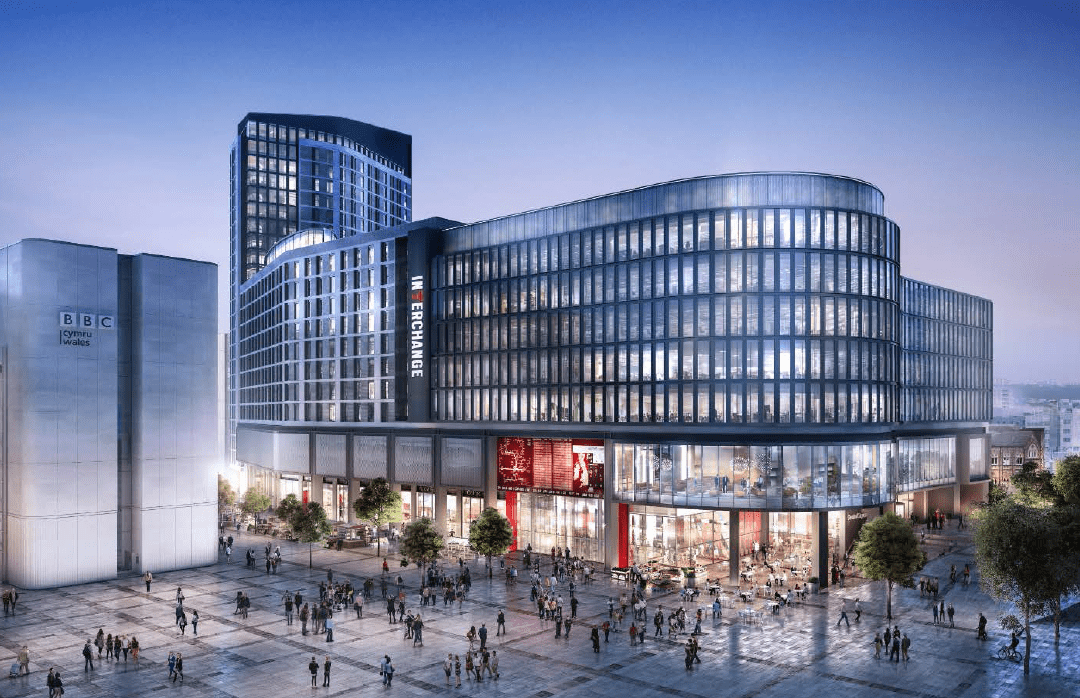 Legal & General, one of the largest private employers in Cardiff, announces that it will relocate its two Group offices in Wales to a 120,000 sq. ft. facility in Cardiff’s Central Square as part of a wider £450m regeneration scheme.

The move, which is planned to take place in early 2023, will see over 1,800 Legal & General employees relocate from its existing offices in Cardiff to a modern, eight-storey office space within ‘The Interchange’. It will be located alongside the new BBC Cymru Wales broadcasting studio, HMRC and Cardiff Transport Interchange.

The £140m Interchange building is the fifth phase of development in the Cardiff Square regeneration scheme which, in addition to office space for Legal & General, will include 318 build to rent (BTR) homes and a 14-bay bus station. The scheme has been brought forward as a collaborative effort with government stakeholders and Cardiff-based developer Rightacres, creating a world-class regeneration project which sets the city apart as one of the UK’s leading places to live, work and invest.

This announcement marks one of the largest office lettings in the UK this year and the state-of-the-art new office and associated services will provide staff with a collaborative, agile space to meet changes to working practices in the wake of Covid-19. It will incorporate a focus on staff wellness and wellbeing, incorporating cycle and changing facilities, café, social space and an external terrace to meet shifting needs. In line with Legal & General’s wider commitments to ESG, the fit out will target Net Zero Carbon and reduce embodied carbon throughout the base build. It will also be developed in line with Well Gold and BREEAM standards.

“This is a landmark moment for Legal & General, bringing almost 2,000 of our people to a modern, state-of-the-art office space which sits within one of our most iconic regeneration schemes. We believe a new form of office has a key role in the future of towns and cities and are creating a space which is pioneering and innovative and will continue to drive up productivity, collaboration and idea sharing.

“Even in the wake of the crisis, we continue to commit to UK towns and cities, creating new opportunities for local people and helping to boost regional economic output. I am extremely proud of our work we have done at Central Square, which upon completion will add around £1.1bn of gross value added (GVA) to the region and create up to 13,000 new jobs.”

“The new interchange building is being delivered on a fully commercial basis and the announcement that Legal & General will be relocating their headquarters to the Interchange is a major investment into the project and the city.

“This has been made possible by working closely with Welsh Government and Transport for Wales and I am pleased to see the mixed-use scheme is now both affordable and commercially viable and the build is well underway.”

“I welcome the news that the Legal and General Group are to take up office accommodation at The Interchange, at the heart of our capital with easy access to multi modal transport. As a major employer in the area, it’s excellent news it has committed to maintain a significant workforce in Cardiff for the long-term.”

Construction began on The Interchange in December 2019 and is due to be completed in November 2022. Development of The Interchange will be undertaken by Cardiff-based developer RightAcres, which has partnered  with Legal & General on all phases of the Central Square regeneration project. The Interchange has been designed by Holder Mathias Architects. Its supply chain will promote local first, looking to use local suppliers and products wherever possible.

Legal & General’s commitment to Central Square was announced in late 2015, with the business already having delivered over 700,000 sq. ft. of office space alongside several retail units. The scheme is one of a number of Legal & General’s major regeneration schemes in UK towns and cities, which includes projects in Newcastle, Salford and Sunderland. Using dynamic partnerships with the public- and private-sector, Legal & General has so far invested over £25bn into direct investments such as clean energy, transport infrastructure and multi-tenure homes, recycling funding from UK pensions and savings to support regional economic growth.

112 Talented Athletes across Cardiff to benefit from £44,800 fund

New visuals have been revealed showing how Cardiff University’s Bute Building, home to the internationally-renowned Welsh School of Architecture, will look once its major refurbishment is complete. Global design practice BDP’s Cardiff studio is the project architecture and principal design practice on the project, as well as advising on acoustic design. BDP is celebrating its 60th anniversary this year. The £9.7 […]
The post New visuals reveal new-look Welsh School of Architecture appeared first on . Latest Cardiff News…