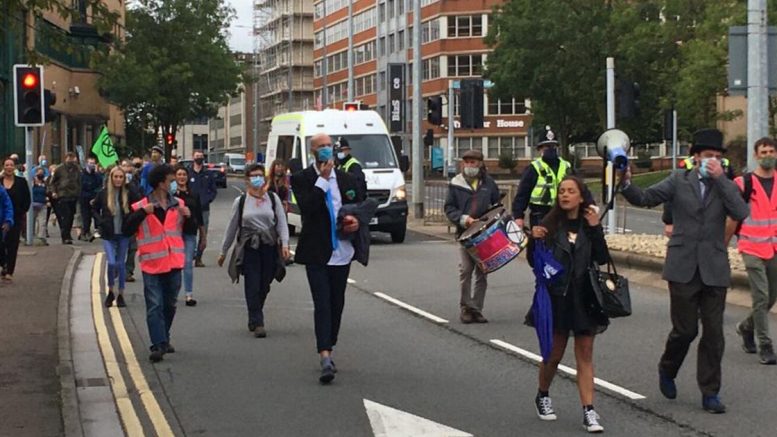 Extinction Rebellion protesters are marching through Cardiff city centre at the end of a week-long campaign in the city.

They say the focus will be on the wider issues of climate and “ecological justice”.

The march, from City Hall to the Senedd, has been organised by a  new coalition of campaigners and organisations from across south Wales called Justice Now.

More than 100 protesters used vehicles and bamboo lock-ons to block roads outside the Newsprinters printing works at Broxbourne, Hertfordshire, and Knowsley, near Liverpool on Friday.

The presses print the Rupert Murdoch-owned News Corp’s titles including The Sun, The Times, The Sun on Sunday and The Sunday Times, as well as The Daily Telegraph and Sunday Telegraph, the Daily Mail and Mail on Sunday, and the London Evening Standard.

In Cardiff this week protests have been held outside the BBC building in Central Square and at an incinerator plant in Splott.

Cyclist thought to have come off his bike near roundabout dies

Protesters say they are continuing to seek answers WalesOnline – Cardiff …

Cardiff Bus customers are being alerted to service changes taking place across its network from this weekend. The operator is set to alter services from Sunday January 17th with customers advised to only travel for essential reasons and check all timetables before they travel if their journey is necessary. The decision to reduce services has come as a result of discussions between the Welsh Government and bus operators, to reflect the current and ongoing lockdown. Timetable changes will affect all services apart from 65, 65A & H59 which will remain the same. Unfortunately, services 12, 53, 66, 93, 95A, 95B, […]
The post Cardiff Bus to reduce service from this weekend appeared first on . Latest Cardiff News…

A number of services are being scrapped temporarily WalesOnline – Cardiff …