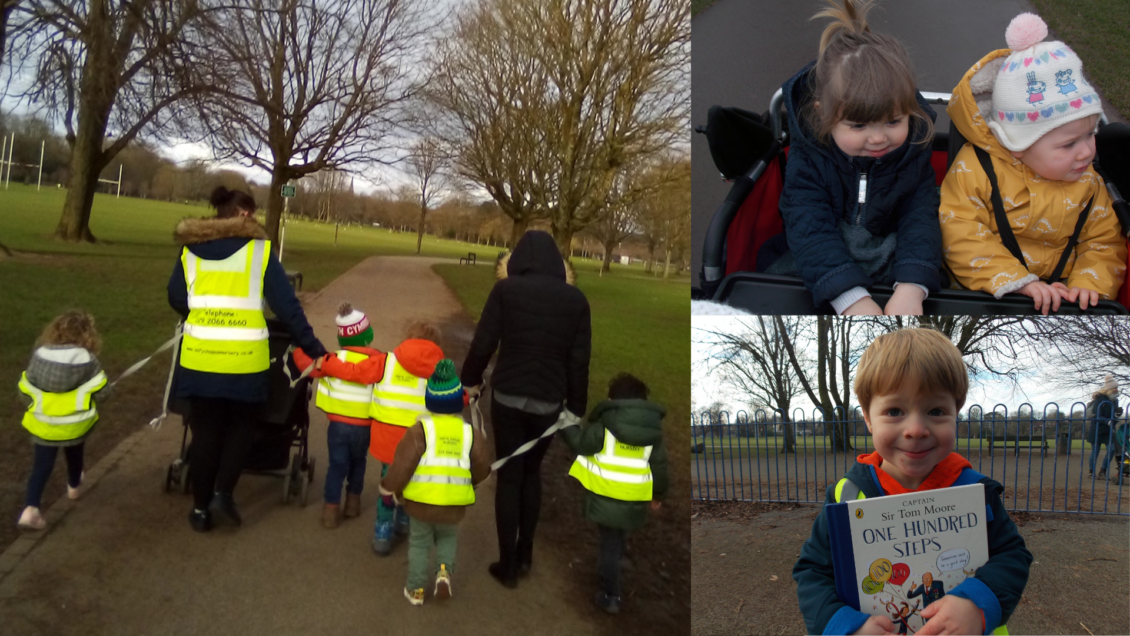 Staff and children from Enfys Hapus Nursery in Cardiff did 100 steps in memory of Captain Sir Tom Moore and raised £635 for the Noah’s Ark Children’s Hospital Charity.

The nursery, based in Canton, wanted to do something to honour the inspirational Captain but also wanted to support a charity close to their hearts. Initially, they set their fundraising target as £50 but ended up raising £635.

The children, aged between 1 and 7, enjoyed going out in all weathers to do their steps, alongside nursery puppy Rosie.

Paige Webbley, nursery manager said “We wanted to do something to honour Captain Sir Tom Moore but also wanted to raise money for the Noah’s Ark Charity. The staff and children walked, and some of the babies crawled, the 100 steps to say thank you to Noah’s Ark. We went out in all weathers just to make sure we did all the steps! The reason we’re supporting Noah’s Ark is because children in our families have been helped by the hospital so it’s a charity close to our hearts but also the parents’ hearts too.”

The Noah’s Ark Children’s Hospital Charity supports the only children’s hospital in Wales, helping to ensure world class care and the best outcome and experience possible for the young patients who receive treatment there.  Right now, the charity is committed to helping the Noah’s Ark Children’s Hospital for Wales and its families to get through the pandemic in whatever way it can. At the beginning of the Covid-19 crisis, the charity saw an immediate 50% drop in its fundraising income. The Noah’s Ark Charity also doesn’t benefit from any funding from NHS Charities Together.

Rachael Southcott, events and community officer for Noah’s Ark said “We are so grateful to the children and staff at Enfys Hapus Nursery. As well as being a touching tribute to Captain Sir Tom, their challenge has raised vital funds that will help us continue to provide life-saving equipment and services to support the children and families who need us. It’s been a very uncertain year for the charity so it’s really heart-warming to see such amazing support in the community.”