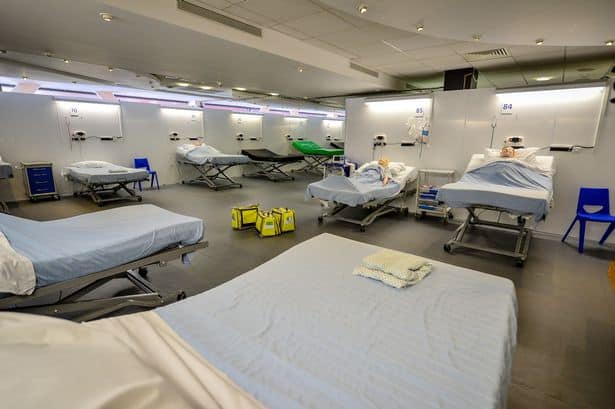 The field hospital set up at the Principality Stadium to help in the fight against coronavirus is being decommissioned, it has been revealed.

The home of Welsh rugby was transformed into the 1,500-bed capacity Dragon’s Heart Hospital, opening its doors in April.

But after receiving a total of 46 patients, WalesOnline revealed the facility had been put on standby back in June, with staff standing down and being redeployed elsewhere.

Created to help ease pressure on the NHS amid fears it may not have enough beds to deal with the number of people who potentially could have needed hospital treatment for coronavirus, the hospital’s first patient arrived on April 29 and at its peak the maximum number being treated was 34.

Now, it’s being decommissioned from the autumn, with Welsh Rugby Union chairman Gareth Davies detailing how parts of the stadium have already been decommissioned, while the pitch area will be the last area to have health facilities withdrawn in October or November.

“We are looking at decommissioning the stadium from the autumn”, Davies told the BBC.

“Parts of the stadium on level four and five have already been decommissioned and we have been talking with contractors about reinstating bars and suites.

“The only beds in the stadium are in the bowl and the pitch so that will be the last to be decommissioned towards the end of October and early November.

“This means we can get on with replacing the seating that has been taken out and the important factor of getting the pitch done.”

However, no events will be hosted there for the rest of this year. But the latest development means he is confident Wales’ Six Nations 2021 home matches against England and Ireland can be staged as planned at their usual home.

“I am probably more optimistic than I was a couple of weeks ago,” Davies added.

With the stadium out of use for Wales’ autumn Tests, the WRU is likely to stage the ‘home’ games in England regardless of the Welsh Government stance on allowing fans into sports events, unless the UK Government deems no fans can attend matches across the border.

When the Dragon’s Heart Hospital was first set up it was designed to be a “step-up and step-down” hospital for patients coming to the end of their Covid-19 treatment, requiring rehabilitation and support, and those needing end of life palliative care – if hospitals couldn’t cope.

The pitch area was covered with a huge tent to house beds as the facility became Wales’ largest temporary hospital, and the UK’s second largest.

Corridors once full of fans and stewards were replaced with nurses’ stations and monitoring equipment, function rooms normally packed full of business people were turned into wards, while coveted boxes overlooking the pitch were full of hospital beds.

As the WRU looks to get its facility back up and running as an events venue, it has already forecasted a busy year on the concert front with artists – hopefully – set to play to huge crowds once more.

Speaking in July, departing WRU chief executive Martyn Phillips said: “2021 has the potential to very busy as promoters and acts look to return the stage after 2020 was wiped out for large events.”

It comes after it emerged that two field hospitals set up in Carmarthenshire at the height of the coronavirus outbreak are being closed down and returned to their former use.

Run and managed by Carmarthenshire Council, they had been handed over to Hywel Dda University Health Board in April.

Temperatures to plummet next week after this weekend’s warmer spell

Woman, 80, in serious condition after being found unresponsive in street