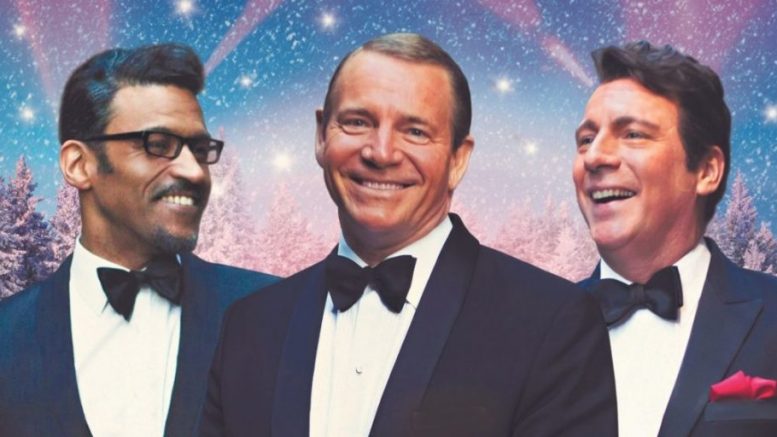 Christmas in Cardiff was in full swing last night, as the Definitive Rat Pack brought its sell-out set to St David’s Hall.

Audience members were treated to a little taste of Vegas on a cold winter’s evening in Cardiff. It may sound a little cheesy, but with the frosty weather outside, it gave the perfect backdrop to some very iconic Christmas tunes performed by the Rat Pack trio.

On stage, you will have find the very charming and talented Stephen Triffitt as Frank Sinatra, Mark Adams as Dean Martin, bringing his own camaraderie to the role, and the witty tiptoeing George Daniel Long as Sammy Davis Jr. This is the point in the review I would usually rattle off the accolades of each, but if I did this, you’d be here all-day reading. What you need to know is that they are talented to the highest of highs, it’s in their blood, they are born to be them. They aren’t acting, and I don’t think you can ‘act’ in this environment either, it would be far too noticeable if they did. What is apparent is that they are enjoying every second of the performances, and it shows, rubbing off on the audience who are eagerly looking to join in at a moment’s notice.

I’ve said this before, but what makes St David’s Hall a special venue is the whole stage setup. The concert hall has an impressive 2,000-seat capacity, but with its low-profile stage it makes for an intimate setting. Would it work in a larger venue?  Perhaps, but would you get the same audience interaction that makes even the people sitting up in the god’s feel part of the show? May be not.  When Frank gestures the microphone to the audience to join in and sing back the next part, we are all singing into that mic because of it.

The evening consisted of festive classics, including Christmas favourites such as White Christmas, Baby It’s Cold Outside, The Christmas Song and Let It Snow, plus all-time Italian treasures Volare and That’s Amore. The opening with It’s the Most Wonderful Time of Year involving the full company was a real hit and one that just resonated with every single audience member.

For those that don’t know the origins of the ‘Rat Pack’ from a 1950s night out in Vegas – the term has evolved over the years and has taken many forms. How many were in the pack? Were there 3? 7? Did it include both men and women? You can bet your bottom dollar it did. I’m sure like a lot of people and until this evening, I had no idea the true meaning behind ‘Rat Pack’. So let me have a go at this… and you can correct me if I’m wrong in the comments.

The term ‘Rat Pack’ has become a synonymous phrase for a group of friends, coming together – bringing the best but also bringing the best out of that group. It isn’t limited to one type of performer or talent, and arguably, doesn’t necessarily have to include talent though the stage was swimming with it. Everyone brings something different, whether that is a skill, point of view, or their own unique personality and they certainly all bring a different but complimentary persona to the performance.

Where am I going with this? I stared off talking about how Stephen, Mark and George have done an excellent job of emulating three globally recognised talents. However, what the musical director, Toby Cruse, has created, is their very own ‘Rat Pack’ of industry talents. The Definitive Rat Pack show isn’t about the three names on stage, it’s a collective for everyone – the sound guy Dave, Andy on the sax… Elliot on the drums, and of course, The Goldiggers. Everyone in fact.

We have renowned musical director and founder of Worldwide Entertainment, Toby Cruse, and his team to thank for bringing this spectacular performance to Wales. Toby, who took charge of the evening (although you may have thought Frank did), orchestrated the Manhattan Swing Orchestra through a repertoire of superb Christmas hits.

Some may say the stars of the show were the Rat Pack trio, but it’s an all-encompassing performance that gives airtime to the show’s other highly talented stars – the musicians and The Golddiggers. There is nothing like a live orchestra, especially at Christmas, as it brings authenticity and raw sound, which for swinging hits such as That’s Amore with Dean Martin, is a must.

If you get the opportunity to visit the show, it’s a show you shouldn’t miss, especially if you want to capture the Christmas spirit with a hint of old-time Vegas.

The Definitive Rat Pack next visits the Royal Concert Hall in Glasgow before heading to London. To find out more and to book tickets, visit thedefinitiveratpack.com/dates/