Rob Lindley, Managing Director for Mitsubishi Motors UK Distributor, the Colt Car Company, has spoken about his 32-year career in the motor industry, including the effects of the financial crisis of 2008 and more recently the huge impact of COVID-19. 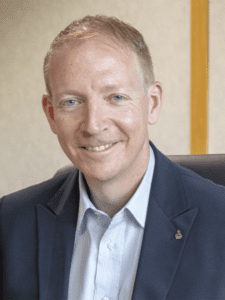 Lindley was speaking to business leaders across Wales at the Cardiff Business Club’s latest gathering on Monday February 22. The event, which has been held virtually since September 2020, detailed Mr Lindley’s experience working with big name motor companies including Ford, Mazda, McLaren and Harley-Davidson and how he has supported each brand during a major transition.

His latest role, however, looks to be his biggest challenge following a significant change in Mitsubishi Motors global strategy due to challenges presented by the ongoing pandemic. In July 2020, Mitsubishi Motors announced it was to consolidate its business to core markets and segments and as a result, would not be bringing any future new models to Europe.

During his speech, Lindley said: “When I started with Mitsubishi in 2018, my brief was to grow the business to 50,000 vehicle sales from 28,000 over five years. We made solid progress but clearly COVID-19 has had a dramatic impact. The pandemic was a huge shock to our business and to Mitsubishi Motors’ business worldwide and clearly they had to make some extremely tough decisions.”

Lindley is focused on leading the Colt Car Company, the Distributor for Mitsubishi Motors in the UK, through a successful transition to become an aftersales-only business by the end of the year.

Speaking about the ongoing challenges for car companies operating in the European market Lindley said: “The European car market has the highest regulatory standards and the highest operating costs of any major market in the world. Europe also has a regulation called Clean Air For Europe (CAFÉ) which requires all manufacturers to significantly reduce the average CO2 emissions of the cars they sell each year or face huge fines up to billions of Euros. Overlaid with the shock presented by the pandemic, it makes the European market an extremely challenging place to operate profitably.

“It’s a very challenging period for the car business as a whole, especially here in the UK, with Brexit creating further challenges, despite the trade deal with the EU. I suspect that Mitsubishi won’t be the only car company looking closely at their European business and whether they can afford to continue to make new product investments there.”

Lindley spoke about his belief that rules of origin regulations will make it critical for car companies wishing to continue to assemble vehicles here in the UK to also consider building the powertrains and electric batteries here.

During questions, Lindley spoke of the roll-out of electric vehicles and its importance for the industry going forward and his personal confidence in a future that will involve autonomous vehicles. He also reiterated that the car industry remained a valuable place to work and stressed the importance of pursuing a career you are passionate about.

The full address and Q&A can be viewed by the following link: https://www.youtube.com/watch?v=XMo33IbHDwE&feature=youtu.be

Cardiff Business Club’s next event will take place on Monday March 15 with Admiral Tony Radakin, First Sea Lord and Chief of the Naval Staff speaking. To secure a place or find out more about the Club visit www.cardiffbusinessclub.org/events.