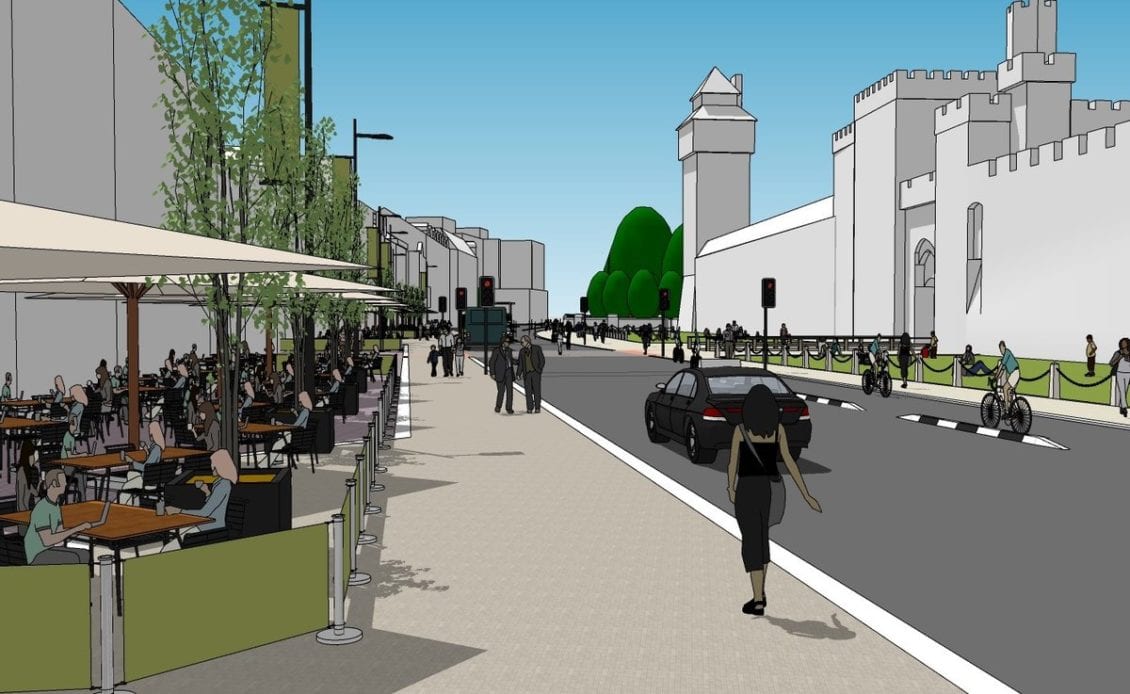 Cardiff Council will be re-opening Castle Street to buses, taxis and emergency vehicles as a temporary measure on Sunday November 29th, while a public consultation is held on the future of the thoroughfare.

The re-opening will help buses and taxis cross east to west and west to east more effectively during the on-going road works in the city centre.

This temporary design will ensure that the pop-up cycleway – which will run from Leckwith Road up Newport Road to the junction with Broadway – will be retained as part of the temporary scheme.

This will also include extending the pavement alongside the shops and bars opposite the castle into the road to give a wider walkway for people to socially distance. It will also create an opportunity for hospitality businesses to have more space outside their premises to trade.

Under the plans, Castle Street will contain two lanes for buses and taxis to travel east and or west, and the pop-up cycle lane by the castle will remain.

Work has also taken place on Westgate Street, to extend the pavement to give extra outside space for bars and restaurants, while ensuring there is enough road space for buses and taxis to travel up and down Westgate Street onto Castle Street.

The scheme is being installed at the end of November, so it can bed-in before the Christmas season begins.

Cllr Caro Wild, Cabinet Member for Strategic Planning and Transport, said: The Council recognises that the closure of Castle Street has divided opinions, with strong arguments being made in favour and against the changes that have been implemented in recent months.

“Alongside a detailed modelling exercise on future traffic flows, we will undertake a comprehensive consultation exercise, involving city centre businesses, local residents, and citizens across Cardiff, to help determine the final plan for the street.”

Cardiff Council is monitoring congestion and air quality across the city centre. It will undertake detailed modelling on any long-term plans, which will help determine if any additional mitigations are required in neighbouring wards.

Cardiff Council in partnership with Cardiff University, is providing children and young people with a unique and innovative opportunity to help shape the future of Cardiff by using a virtual game platform. ‘Craft Your City’ is a Child Friendly Cardiff initiative which aims to engage young people in a range of strategic developments by using Minecraft Education. Developed by Cardiff’s Education Service and Cardiff University School of Computer Science and Informatics, the digital approach sets a series of real-world challenges and provides a way for young people to share their ideas of how they would like Cardiff to look in […]
The post Youngsters asked to help shape Cardiff using Minecraft appeared first on . Latest Cardiff News…