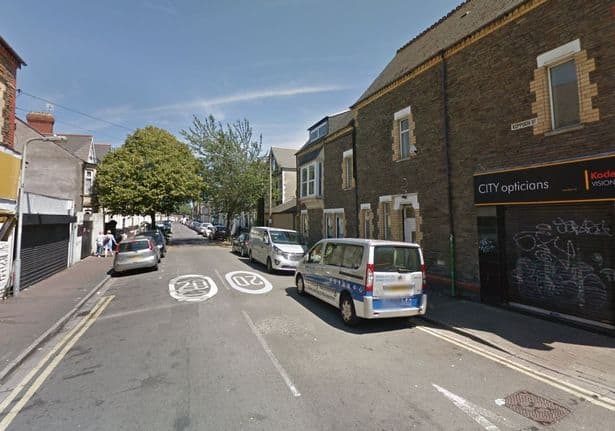 Two lone women have been attacked and punched at night by men on pushbikes in Cardiff.

A woman in her 40s was faced with a man brandishing a knife as she walked home from the shops in Roath just before midnight.

The man, who was with a male accomplice, made off with her handbag at 11.50pm on Keppoch Street on Tuesday, September 8.

A second woman, who is in her 30s, was approached by the same men the night before at around 10.15pm on Alfred Street.

She too had her handbag robbed after visiting the local shops on Monday night. Alfred Street is just off the popular Albany Road while Keppoch Street is less than 200m away.

South Wales Police says it has stepped up patrols in the area following the robberies on consecutive nights and is warning people to stay vigilant.

A spokesman for the force said: “There have been two street robberies in consecutive nights involving lone females.

“Extensive enquiries are underway by detectives to identity and arrest those responsible. The suspects are two males on push bikes.

“On both occasions the women, who were walking home from local shops, were punched and on the second occasion a knife was produced.

“Such violence will not be tolerated and to target lone women in this way is particularly cowardly.”

Armed police called to two sites in Cardiff after ‘threats’ made

Cardiff-based Matsudai Ramen is set to expand operations, rolling out national deliveries for its ‘assemble at home’ ramen kits from February 4th. Since starting with a ‘pop up’ model in late 2019 – which involved taking over local restaurants for short-term residencies – Matsudai’s “proper ramen” has attracted a cult following in South Wales – it is still the first and only standalone ramen ‘shop’ in the country. It has also made waves internationally, inspiring other pop-ups and shops to open in Bristol, the Philippines and beyond. Tough restrictions on the hospitality sector forced founder James Chant to adapt his original business […]
The post Cardiff pop-up Matsudai Ramen to trial national deliveries appeared first on . Latest Cardiff News…

While most people have been making sacrifices and sticking to the rules, a minority have carried on partying WalesOnline – Cardiff …

A Cardiff resident has been found guilty of speeding on the River Ely and ordered by magistrates to pay a £1,200 fine. Darren Ryan, from Leckwith, was filmed exceeding the legal maximum 5 knot speed limit, which also applies to boats using the River Taff and the Cardiff Bay inner harbour, on two separate occasions last June. Mr Ryan, who was in control of a boat named ‘Sea Leopard’ at the time of the offences, failed to attend court and was found guilty in his absence of breaching Cardiff Harbour Authority byelaws 5 and 14. Harbour Master, Andrew Vye-Parminter said: […]
The post Cardiff man fined for speeding on the River Ely appeared first on . Latest Cardiff News…

A unique body of work created by renowned artist Professor Sue Williams during lockdown has been purchased by the National Library of Wales. Cardiff-based Professor Williams, who is course manager in Fine Art: Studio Site & Context at the University of Wales Trinity Saint David’s (UWTSD) Swansea College of Art, spent the lockdown of 2020 at home alone and used the time to create artwork in three Chinese folding books which she had had specially made on a trip to China in 2017. Faced with the loneliness of the lockdown, she used books to record a unique diary of the mental […]
The post Professor’s artwork purchased by National Library of Wales appeared first on . Latest Cardiff News…