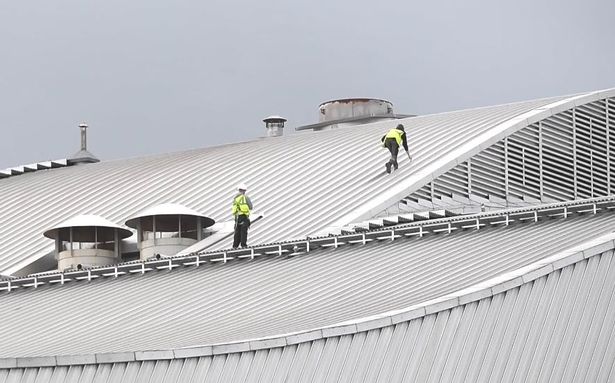 A company which runs a large waste incinerator in Cardiff is investigating after a worker was spotted sliding down the roof of the building.

Footage appears to show a man sliding down the roof of the Cardiff Energy Recovery Facility at Trident Park in Splott on Friday.

Two men, wearing hi-vis jackets and helmets, are seen standing on top of the building in the video. One of the men, who does not appear to be wearing a harness, is seen walking up the curved shaped roof before sliding back down it while appearing to hold a mobile phone out in front of him.

Viridor, which runs the incinerator, said the two men seen in the video are not employees and are external contractors that were working on the roof as part of scheduled maintenance.

Viridor said they have been removed from the site and it will now be carrying out a full investigation.

A Viridor spokesperson said: “Viridor takes the health and safety responsibilities of its employees, contractors, and public very seriously.

“The two men filmed are contractors that were working on the roof of the energy recovery facility as part of its scheduled maintenance.

“The work has been stopped and the contractors have been removed from our facility with immediate effect. We will be conducting a full investigation.”

Viridor said it was unable to provide the name of the contractor while it investigates.

The incident happened while Extinction Rebellion protesters were outside the front of the building.

The protesters were at the site in protest of plans to build a second incinerator in the area by the giant incinerator group Mor Hafen.

You can read more about the Extinction Rebellion protest here.

What you can and can’t do under new lockdown rules