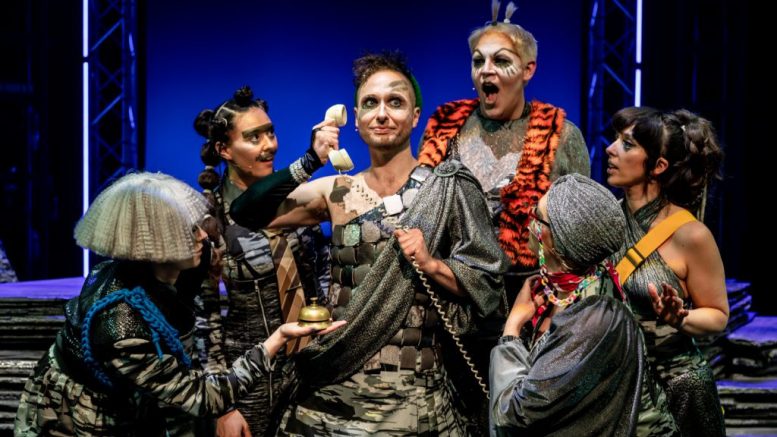 After delighting audiences as The Ghost of Christmas Present in A Christmas Carol last year, Seiriol Davies returns to the stage with his ferocious new musical comedy Milky Peaks.

If the title Milky Peaks sounds familiar, then you’re not wrong. Back in 2020 the show was in its final rehearsals when the pandemic hit, and the venue was forced to close. So, it’s great to see it not to go to waste and return to where it should be.

The show is set in the foothills of Snowdonia and that’s where you’ll find the Welsh town of Milky Peaks. A charming Welsh town that is absolutely bubbling with very ‘individual personalities’ and life’s characters, which we can all relate to. Think Gavin and Stacey meets Stella, injected with musical talent and you’ll probably find something in-between. Although, we must stress, this is a very unique and individual performance, full of very individual and normal Welsh folk. Mostly.

Milky Peaks is narrated throughout by the ‘chorus’, who help string it altogether and guide you through the story. The story of Milky Peaks centres around its nomination for “Britain’s Best Town”, although it isn’t quite what it seems and appears to be run by a shadowy organisation with alternative motives.

This hilarious comedy follows three lost souls and a shabby drag queen, with the story each visiting one another’s dreams and deepest desires to fit in, in their own every unique and ‘normal’ way. What they discover is the importance of being themselves and they don’t need to fit society’s perception of being normal at all. Audiences join them on this journey of self discovery, whilst they try to save their community’s heart when the dark side of the award threatens to blow the community apart.

With it being a comedy, there is a lot of steroptyping, but Seiriol Davies has cleverly addressed these in a way that does not make fun of, but instead highlights and educates us on some of the prejudices that people face. The comedy aspect instead comes from personality traits and behaviours, which many of us are guilty of, and then intertwined with some of society’s taboo subjects where the ‘adult and sexual themes’ warning comes in.

The staging is very minimal but also fluid, and as the performance goes on you’ll see it transform for each of the Acts, including an unexpected surprise later in the show. The lighting and sound effects really help to tell the story, bringing it to life, and adds a bit of phaw!! In fact, the musical director, Dylan Townley, stars in the show both playing the music on stage and being a member of the chorus. The one teaser that we will leave you with, is the fact that he plays a barman type role, taking the shape of a ‘hole in the wall’… so watch out for that one.

So whether you’re a regular theatre goer or into your comedy, or both, then this is the show for you. Milky Peaks provides laugh out loud comedy and is full of highly talented individuals, who I’m sure we’ll see more of in the future.

The new production is brought to audiences by Theatr Clwyd, Áine Flanagan Productions and Seiriol Davies is currently touring Wales, having made its world premier earlier in April.

Milky Peaks is currently showing at the Sherman Theatre Cardiff before it makes it way to Pontio Bangor next week.

For more information and to book tickets, visit the Sherman Theatre website here. 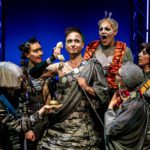 DEPOT to support local hospice as their charity of the year

Principality head office re-opens after two and half years